Previously I have talked about sci-fi dungeon crawls and how technology affects it. I mentioned in passing to draw inspiration from Immersive Sims, which is a genre of video games that try to present levels with interactive systems. What I want to do with this blog-post is to set the stage for discussing the design of sci-fi locations for roleplaying games. I will make up some terms, keep it system agnostic, and provide some perspectives that will hopefully be useful to you.

Astronauts frolicking near their surface base.

The following things are required for each of these locations:

Let’s break these down a bit.

Power plants are inevitable. It can be an ominous sphere-like device, humming in the depths of the engineering bay, or it can be an array of solar panels. What power plant the location needs generally depends on its function and should be dimensioned appropriately. You don’t have to be specific about this - you could just call it “power plant” and move on. But there are some options:

The power plant is a big element when it comes to the layout of your location. Spaceships and space stations usually wrap around them, making up about a third or a quarter of the location’s total size. For surface bases, it is different, as you can have a dedicated building to the power plant. 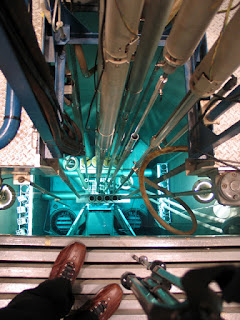 The original uploader was Zereshk at English Wikipedia. - Transferred from en.wikipedia to Commons., CC BY-SA 3.0, https://commons.wikimedia.org/w/index.php?curid=2124629

Life support comes in many forms, but they are primarily oriented on the atmosphere and waste processing. Bad air and sewage have to be captured and recycled. Most of these processes can be handled in a set of specific rooms, with adjoining pipes and tubes that connect through most of the location.

For most ships and space stations, the air tubes have to connect to every single room. Many rooms are likely to be connected with backup air tanks, should the life support facilities get knocked out. Toilets and bathrooms would probably be situated close to the water treatment facilities - no need to weigh the ship down with long and heavy water pipes.

For surface bases, life support doesn’t have to be complex. If the world has an Earth-like atmosphere, then the system just needs to regulate temperature and handle sewage.

Habitation space, in this context, means any space where the inhabitants are expected to spend their personal time, including cooking and sleeping. For spaceships and space stations, habitable space by volume is a premium. Every gram counts on a ship, so think accordingly when designing crew quarters. I would advise coffin-like “dormitubes” and minimalist kitchenettes, to give the cramped feel. Only “luxury” spaceships would bother with having spacious habitation space.

For both space stations and surface bases, using inflatable habitats, or “space tents”, will likely be practical. It is a real-life technology that has a lot of potential. Naturally, these habitats are vulnerable to debris, cosmic dust, and such, but they won’t pop like balloons. Inflatable habitats are portable, as they are easy to dismantle and made of flexible materials. They can be set up ad-hoc to accommodate varying crew sizes and be used in emergencies as ‘lifeboats’.

For surface bases on Earth-like planets, habitation space can be more accomodating. Given an abundance of usable materials and a safe atmosphere, the limiting factor is usually just labor. If your futurist settlement has worker-robots, the houses of the future could be 3d-printed or assembled by friendly robots with uncanny voices. 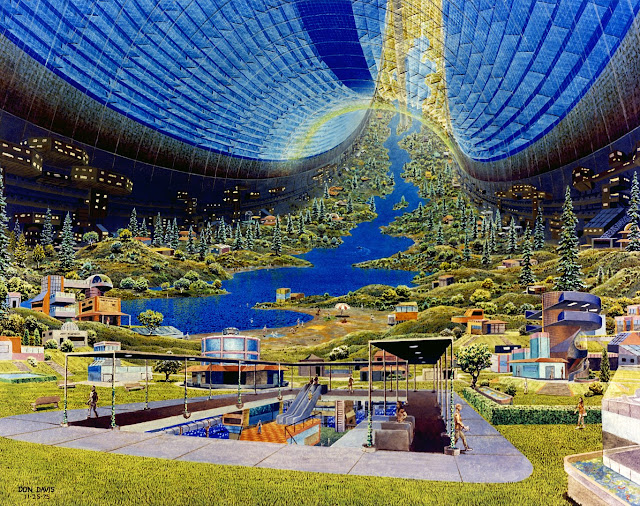 Operations spaces are where the work happens. These spaces are purpose-built to support the work necessary for the location, be it for manufacturing or maintenance. This category is a bit abstract compared to the others, so let’s look at some examples.

On spaceships, any space surrounding a critical system, such as the reactor, ammunition gantries, sensor hardware, and such would be considered operations spaces. Operations spaces are often compartmentalized, separated with bulkheads, to prevent several systems from being compromised if the space is damaged. Sometimes the operations space isn’t necessarily habitable -  such as the storage holds of a freighter. Or the “ice hold” on the Cantebury, as seen in the Expanse tv show. 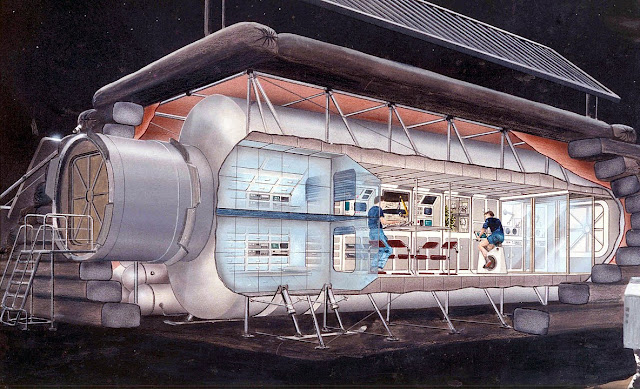 On space stations, operations spaces are not very different from spaceships, but here you are likely to see factories, laboratories, offices, and hospitals. Space stations are not constrained to constantly pushing around their own mass, so they can afford to have larger spaces. One consideration to have about these things is that some processes require gravity or something like it. Thus, some operations spaces could be exclusive to ring or cylinder habitats.

On surface bases, you would likely have purpose-built structures to accommodate operations spaces. If possible, most people would not want to live next room to a noisy factory. Unless the atmosphere or ecosphere is an issue on the planet, then using the layout of industrial complexes on Earth is completely valid. I.e. a college campus would likely be the same on Ilus as it would be on Earth. If the surface base is on a moon or asteroid, the operations space would likely also have its own specific building, but it would likely be connected with pressurized tunnels or trams. 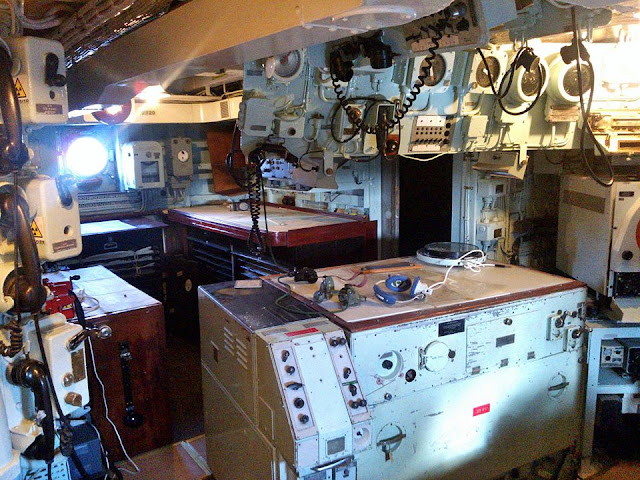 In general, a control space should have lots of cool terminals, but likely also some dead switches for emergency shutdowns. Control spaces should also be situated relatively close to the operations space they are connected to, including being inside them. Central control spaces, like a bridge or CIC/AIC, should have a position that is both secure and wired up appropriately. A wealth of data and electronics should flood to this space, so you should try to reflect that appropriately. Maybe it is surrounded by humming data cores? Star Trek represents the bridge at the top of the ship, which is pretty exposed and overall more vulnerable than the mid decks. I prefer the control space as represented in Battlestar Galactica, where the CIC is buried deep inside the metal behemoth.

Overall, the more critical the control space is, the more defended it should be as well. Consider putting in gun turrets, heavy bulkhead doors, and various countermeasures. Any infantry action to seize such a space should be extremely difficult. The last thing you want is an enemy boarding your ship and spiking the reactor to explode.

I touched on this earlier, but in general, I would advise to put in lots of storage spaces, ranging from larger cargo holds to pantries and lockers. Don’t underestimate this bit! Players usually like checking lockers for valuables! Being aware of the storage opportunities of a spaceship is often key to a lot of adventuring. Like, can you bring along a helicopter you spontaneously purchased? For a free trader ship, this isn’t a problem - but for a ship like the Millennium Falcon, it would be more difficult.

When designing a location, I usually keep in mind how much storage area they would need to:

You can skip on this if you want, but I believe it really bolsters the verisimilitude of the location. Showing what kinds of stuff is stored in a location also shows how the people live in the location. 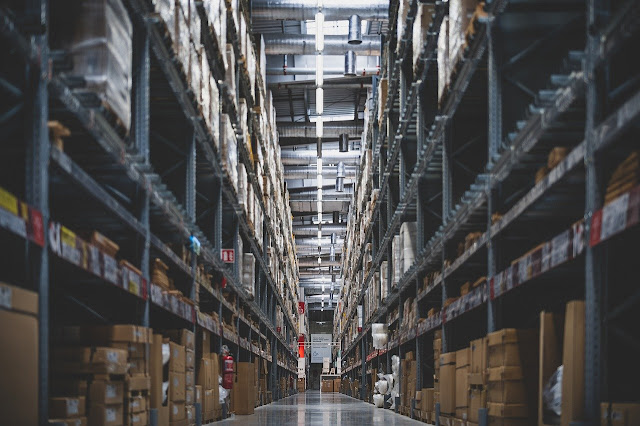 A utility or support space is what I would categorize corridors, airlocks, docking rooms, elevators etc. While sometimes obvious, you don’t want to be the architect that forgot to put in toilets in the building. Another compelling feature in many science fiction locales is crawl spaces, whether it is maintenance access, ventilation shafts, or damp underground tunnels.

So when designing a location, keep this in mind. How do the characters get from A to B inside the location area? Do they take a turbolift? A tram? Walk? And if there’s a room, make sure it has ample access routes. The more the merrier.

So this is just the start, I think. I haven’t covered much of what to actually put in the location, and there’s much to pick from there. There are a few topics I want to cover: