So after a discussion about a D&D’ish society that has undergone its first industrial revolution, I came to think of a new school of magic. In this world, banks are a thing, and so is paper money. Now you don’t have to lug around chests of gold coins, but instead a fat wad of artisanal paper money. Enter the Kermamancer - the MONEY WIZARD. The money wizard has specialized in marking bills, locating stolen money, and launching fists of coins at enemies. Banks employ these wizards to ensure the safety of their clients’ fortunes. If a daring band of adventurers managed to delve their way into a bank, they might end up facing one of these types of wizards and their swole coin golems. 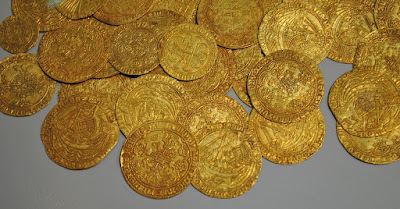 You will need these. Lots of them!

So what will this post be about? Well, I’m going to give you a bunch of OSE compatible spells from the School of Kermamancy, available to any Magic-User. Frogs not included.

The caster marks a coin or a paper bill with an invisible magical mark. Any caster that knows this spell has the following benefits:

-> Sense Presence: Sense an item within 10’ that is marked this way.

-> Illuminate: Cause the marked item to glow a faint blue light.

-> Locate Object: If the caster uses Locate Object to locate a marked item, they may measure the range in miles instead of feet.

The caster is able to learn which people, if any, who has held the coin (be it in hand, in a purse, or chest) within the last 3 days.

The caster is able to determine through their senses whether money in their presence is authentic or not. Counterfit money will have an odious smell and look unpleasant.

The caster levitates 100 coins and sends them flying at  a point within range, sending a hail of super-heated coins in a 10’ wide and 5’ long area.

-> Damage: Creatures caught in the hail of coins suffer 1 die of damage, +1 die for every third level of the caster. A successful save versus spells halves the damage.

-> Super-heated: The coins become super-heated and melt, and will not cool before 2 - 5 turns. Coins used this way must be re-minted to be used again for this spell.

The caster animates a number of coins within the spell’s range.

-> Hit Dice: The animated coins have 2 hit dice +1 hit die for every 200 coins that were animated.

-> Obedient: They obey the caster’s commands.

The caster causes the coins they is carrying to layer themselves across the caster’s body.

Wrath of the Coins

A hoard of coins within 10’ begins flying around the caster at horrifying speeds as if driven by a ghostly hurricane. Anyone caught in its path may suffer damage.

-> Amount:  The caster needs at least 800 coins for this spell, but may use as many as they wish. When spending coins, the coins become inactive after their effect is dealt.

-> Size: The coins fly in a circling pattern around the caster, as far out as 60’.

-> Monsters with fewer than 4 HD: Pushed back to the border of the spells’ area. If escape is impossible, they die after d6 rounds.

-> Monsters with more than 4 HD: Take 1d6 hit points of damage if they are moving within the spell’s area. The caster may spend 100 of the spell’s coins to deal +1d6 damage.

->  Concentration: The wall persists as long as the caster concentrates on the spell and does not move more than half their movement rate.

Duration: Permanent (until dismissed or slain)

Using 2400 coins of the same metal, the caster calls into being a Coin Golem.

-> Materials and Hit Dice: The amount of hit dice the Coin Golem is granted depends on the metal of the 2400 coins. Each coin must be of the same metal as the rest. Platinum grants 16 Hit Dice. Gold grants 14 Hit Dice. Electrum grants 12 Hit Dice. Silver grants 8 Hit dice. Copper grants 4 Hit Dice.

-> Dismissing: Dismissing the Coin Golem causes it to collapse into a pile of inert coins.

-> Dispelling: A Coin Golem may be dispelled by dispel magic or dispel evil.

A humanoid mass of coins.

-> Unhealing: Will not regain hit points.

-> Mundane damage immunity: Can only be harmed by magical attacks.

-> Jet of coins: Can cast Hail of Coins, but suffers 1d6 hit point damage after doing so.

So Kermamancers will most likely hang out in big banks, marking certain amounts of coins or bills every now and then as they are shipped out as part of payrolls. Given their aptitude with money tracking, they will also likely be adept at hunting down bank robbers. Using the speak with money spell, the Kermamancer may be able to track people through their transactions.

I did also allow for some combat-oriented spells, but usually at the literal expense of money. I like the idea of coins-as-bullets, and requiring coins will usually have the Magic-User constantly lug around hundreds of coins. That’s bound to draw some attention.