As part of my Curse of Strahd campaign, I recently ran Winter’s Daughter. Ever since it was released, I had wanted to run it, but could not find a good spot to put it in. Eventually, I did, and here we are. It took about two 4 hour sessions to play through. Since I’ve run it, I feel I can give it a review.

Winter’s Daughter is written by Gavin Norman of Necrotic Gnome and was published April 27, 2019. The pdf clocks in at 32 pages. 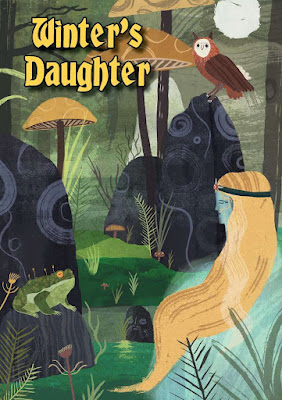 Warning, this review contains some spoilers.

Winter’s Daughter is set in the Dolmenwood setting, but can just as well be used in any other setting that features icy or wintery fairies. The Referee’s Background provides an effective overview in concise prose. In short, the mortals waged a war against the fey many centuries ago. A mythical Sir Chyde fell in love with the fairy princess Snowfall-at-Dusk, starting a star-crossed lovers story. Unfortunately, the princess was imprisoned and Sir Chyde lived out his lifespan without seeing her again.

Their love story remained unresolved, but before the two were separated, their souls were bound together thanks to a magical ring. The adventure leads to Sir Chyde’s tomb, which has been changed by the powers of the ring. The book also provides with a variety of hooks for why the players might be visiting this tomb. The adventure also leaves it open how the tale of Sir Chyde and Princess Snowfall-at-Dusk can be resolved. Some hints at how to handle the end is covered in the epilogue section.

Just a few pages in, Gavin has painted a vivid and old world. The lore is also effective at justifying the presence of the various creatures found inside the tomb. There are also effective pieces of lore from the Dolmenwood setting, including a list of languages that I feel adds verisimilitude. What I find most impressive about this is that this is achieved over 5 pages.

Winter’s Daughter describes three areas; the mound’s exterior, the burial mound itself, and the fairy prison. Each area has a set of random events (1-in-6 chance every two turns), which supports the mood of the area. Each area is in turn divided into several locations, such as rooms or places of interest.

The strength of Gavin’s writing and layout is that the elements in each location are clearly described. Let me show an example: 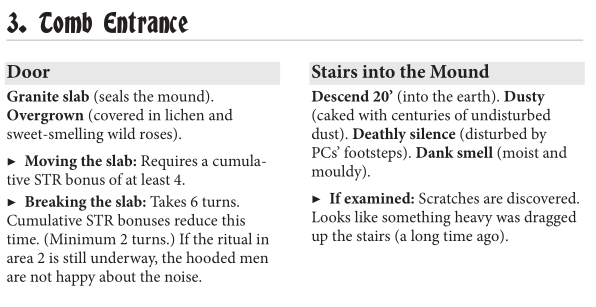 Each location has these headers with gray backgrounds, which highlight the interesting parts of the location. For example, in the above case, the “Door” and the “Stairs into the Mound” call attention to the relevant elements. The bold text under the heading are handy descriptors, with an added detail in brackets. While running this module, I found this to be pretty handy. Just reading the bolded text, like “you see an overgrown granite slab”,  is sufficient information to keep the game flowing. If the players should ask something like “how big is the slab?” then you can depend on the brackets by saying “It’s big enough to seal the mound’s entrance”. Gavin is consistent with this approach throughout the text. I think everyone should take notes from this module.

Furthermore, you can see those arrow points. These represent possible interactions. Another example of this can be seen below, with the “Hall of Guardians”, which is just after the entrance. 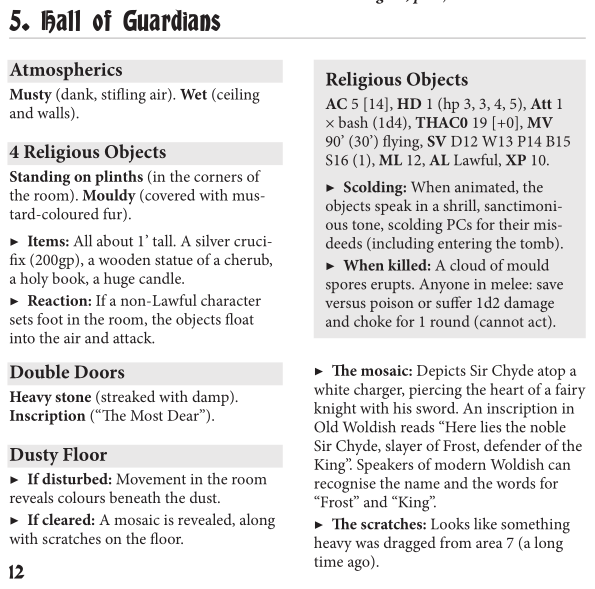 Again, the headers with backgrounds show their strength and flexibility. In addition, I’ll note that Gavin also put the monster stats on the page and included some behaviours for them. This is exceptionally useful, as it cuts down on the page-flipping and contains anything you need to know on the page. While running this, it felt very easy to keep track of all the moving parts. I’ll contrast this to my experiences with Castle Amber, which collected all the monsters in the back of the book, while burying all the location details in dense text.

In total, the whole adventure was a dream to run. At no point did I have to halt to page-flip or feel concerned that I was missing something on the room descriptions.

I was running D&D 5e, so I had to make some adjustments, but not by a lot. There is a 5e version out there too, but I have the OSE version. In terms of theme, I did a bit more of a re-skin. I changed the elves to be Dusk Elves, which more closely matched the Barovia setting. As a mental short-cut, I drew inspiration from the Night Elves in World of Warcraft, so the wintery descriptions were replaced with strange wisps, purple-tinged trees and motes of fairy energy floating in the breeze.

My players were cautious, advancing slowly from the entrance up to the chapel, stopping to play a bit with the entrance to the fairy world (which freaked them out). Bits like the name of the hounds was something they discovered naturally and ended up using to disarm the hounds at the Hall of Hounds.

They agreed to take Sir Chyde’s ring to Princess Snowfall-at-Dusk, and made their way to fairy land. At this point, while in the fairy land, one of the other players who had been absent the former session went and explored the eastern wing, though nothing particularly dangerous happened to his character. Griddlegrim, a Dolmenwood Goblin, fooled the players to think that they needed to eat his shroom to survive the fairy land. Hilarious results ensued.

Overall, I think Winter’s Daughter is a land-mark release when it comes to adventure modules. Most notably for the way it presents its content - the layout is really, really useful. I think everyone should take notes and adopt this style. Recently I have been running a modern Traveller module, and in comparison, it feels like bathing in syrup.

I am very satisfied with the module. If you are considering running Dolmenwood or maybe contemplating a starting adventure for a campaign, I strongly recommend this module as a starting point.

The reddit user hell_ORC in the blog thread on osr asked me about the debated first encounter in the module. I didn't mention it because I chose to not run it. It has been debated because it features a ritual sacrifice or murder of a person, which the players can do very little about. I'll also copy in here what I replied to him about my thoughts about the first encounter:
I didn't run the encounter myself, so I don't know how it would have played out. I left it out because it wasn't quite the tone our group had agreed to play, so out it went. In that sense, the encounter is a bit challenging to play due to its content. I wouldn't be comfortable running it for my kids either, but it could work for the BX group I am playing in. I think it draws a lot of complaints because it has few options and is really a hard bargain that leverages the players' emotions. It is also a difficult encounter to be prepared for. Going from character creation to that encounter could mean that the player's aren't equipped to successfully take on the hooded men. Taking hooded men on in combat is certainly possible, but incredibly dangerous. They only have 12 and 18 hit points, so a well-concerted ambush might take them out quickly. However, the "topple dolmen" and combination of Charm Person or Hold Person can be devastating. It is a very "old-school"-didactic encounter, because it shows that there are dangerous beings that you will encounter, even if you are level 1. In terms of the Dolmenwood setting, I think it fits and casts a dark shadow over the ensuing mound exploration. While it doesn't tie that well into the lore of the mound, the encounter clearly establishes the weird drunic cult. I would leverage the encounter as a way to encourage more exploration in the forest. It could also set up the drunes as an antagonist faction.
adventure old school OSE OSR review 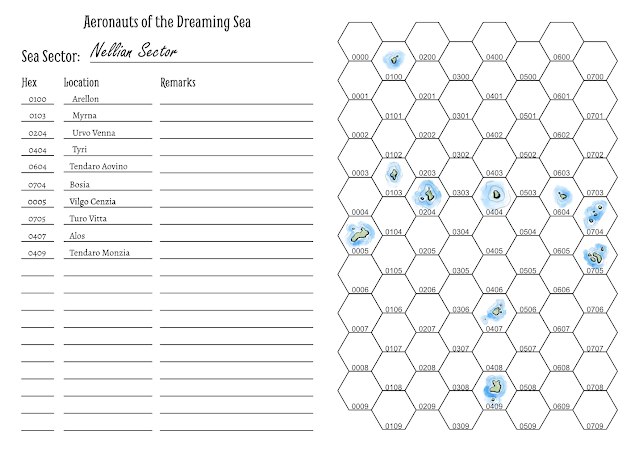 Islands of the Dreaming Sea

In a world half-remembered lies the Dreaming Sea. Hundreds of islands can be found here. Some are undiscovered, others are home to many. In an age of exploration, many have come to the Dreaming Sea to find a new home, trade, or discover. The worries of the Old World are left behind, but there are still dangers here. Strange creatures lurk beneath the waves, while corsairs prowl in the skies. Nature’s tempests will at times blot out the sun and cause great turmoil at sea.  So the blurb above describes the basis of an adventure setting I have been cooking up lately. The setting is inspired by Porco Rosso, Nausicaä of the Valley of the Wind, the Odyssey, and just generally my appreciation of the early decades of flight. The idea is that the players take the role of Aeronauts (like aviators or pilots, really) who are exploring a vast sea that has yet to been explored. Adventures can involve racing, search and rescues, delving in forgotten temples, deterring sky pirates, and bragging about