The most important NPC in your sci-fi sandbox

I’ll be upfront - it’s about the spaceship your PCs call home. If you run a sci-fi OSR game with a spaceship like the Millennium Falcon, the Serenity, or the Rocinante, then chances are your PCs consider it a mobile home.  Having floor plans for the spaceship is great. It gives your players a sense of the vessel. Add to that, letting them “move in” by assigning crew quarters is also great for immersion and roleplaying. But as a referee, you can also go ahead and give the spaceship a sense of character. 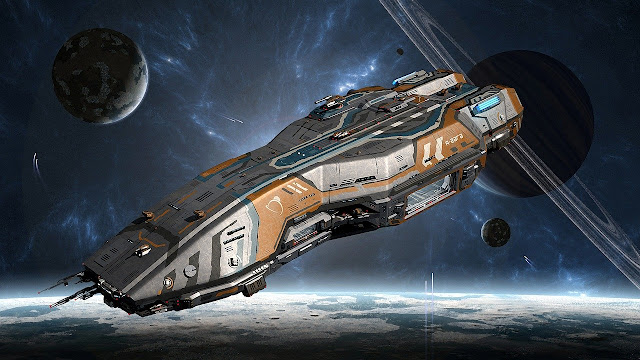 The Raker was real fast, but its coffee machine kept breaking apart.

The most obvious character a spaceship can possess is a shipboard AI. Whether it takes the shape of a hologram, a face on a screen, or even just a disembodied voice, it’s an effective way of giving the spaceship a personality. Like any NPC, the ship AI could react differently to the individual PCs. Maybe it reflects on their personalities, maybe it is prejudiced towards uneducated PCs, maybe it wants to become human. There are already a lot of tropes and memes around this, ranging from the murderous HAL in “2001: A Space” Odyssey to the gamer-endearing Cortana featured in the Halo games.

There are also subtler ways of doing it. Spaceships as homes should reflect the various crews that have lived in them. There could be a series of photos of former crew somewhere in the galley. Strange leaves can be found in the cargo bay, from that one time you touched down on Prasinox IV. The food-sequencer needs a couple of firm taps before it starts printing WondersteakTM. The gangway has been infested with adorable psuedo-birds.

Incidentally, I have made a table that you can use to generate some quirks for your spaceship. 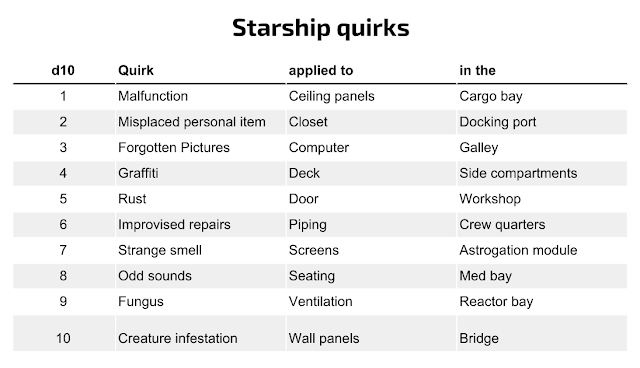 For games like Stars Without Number and Traveller, there is a lot of downtime when travelling with the spaceship. This is also a good opportunity to roleplay some events and form some connective tissue between the PCs. Sometimes these flights last weeks. I think that this time should be played out and not just hand-waved away. This is a great time to break out your favourite carousing rules.

For each day, maybe roll a d6 - or roll 7d6 for a week at the time. If it shows a 1, something happens that day. It could just be, say, the PCs gathering for lunch in the galley. Or it could be some of the passengers causing trouble. If the ship has taken some critical hits that haven’t been repaired, maybe that could trigger a situation that they need to resolve.

Another table for those who want it. 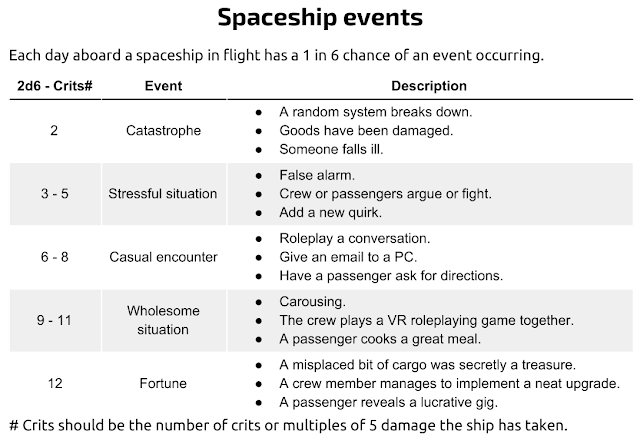 You can probably run whole sessions using this angle, but I think it is best to pace it between the bigger moments. Like in Mass Effect and Outer Worlds, boarding the Normandy or the Unreliable should feel like coming home. Help your players feel the same.
musings sandbox sci fi space spaceship the great filter