I have been running Castle Amber these days. It has a weird mix of rooms, ranging from some odd things to the more bizarre stuff. During the latest session, I came across a design I wasn’t quite happy about, and it involves save or die. 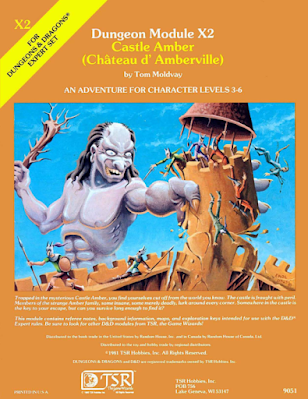 Castle Amber has a few rooms which involve save or die. There is a throne room featuring a deadly throne, a bedroom with a dangerous safe, and an alchemy lab. Two of these rooms offer a choice. One of them can just straight up kill the character, regardless of what they do.

The throne room features a couple of thrones, one of which contains the soul of a magic-user. Upon entering the room, the magic-user’s soul will attempt to take possession of a randomly determined individual. The chances of the possession ramps up over time, but the PCs can presumably escape the hazard by leaving the room.

The bedroom with the safe is quite different. The safe is hidden and trapped. If the PCs somehow manage to open it, they risk exposing themselves to deadly spores which causes anyone within a 10 ft cube to make a save vs. Poison or die.

The alchemy lab is probably less deadly. Once the players all enter the room, it closes up and starts flooding the room with black lotus powder fumes. The PCs can escape if they use knock. However, if they come in contact with the fumes, the suffer magically induced dreams and they must pass two saves vs. Spells. Failing both saves indicate that the content of the dream becomes real. One of the ten suggested dreams basically says the character dies.

So what about save or die?

I think the alchemy lab stands out. At least with the two first rooms, the players have the possibility to leave the room. Creative PCs could probably set up elaborate Rube-Goldberg machines to get to the safe or neutralize the magic-user sould, provided they identify the threats. However, with the alchemy lab, you are trapped and almost entirely dependent on having the knock spell at the ready.

I think the difference is mostly about player agency in these cases. The PCs can choose to enter or leave the former rooms, while the alchemy lab just locks you in. The description says “There is no place in the room to avoid the black dust”. No telegraph, no indication about this danger. Going by the options, not all the dreams are deadly. Some even grant you a new level.

I think that save or die can work, but I don’t think I will ask for it unless three steps have been met:

Chris McDowall wrote some thoughts on good traps. He states the following measures for a good trap:

With these points, I think the alchemy lab has mixed results. For one, the alchemy lab does have “concealed vents”, meaning the players have no idea of knowing they’re walking into a gas chamber. There are very few options for interaction and investigation - just touching the stuff knocks you out. However, the consequences are impactful, but also deflating.

In my future games, I will try follow stick to McDowall’s points and the steps I outlined. I don’t want PCs dying solely because of bad dice rolls. There should be a matter of escalation in interaction.  I think high lethality systems shine when you know you are taking risks and survive. Engaging in combat with max 5 hp is risky - almost any weapon hit can kill you.

The risk makes the game exciting. However, just stepping into a room and then being told “make a saving throw” and “welp, you’re dead”, I think takes the breath out of the game.