- May 16, 2022
I’ve been running and playing in various 2400 and Into the Odd games lately. These are two games that exist in the rules light part of the roleplaying games spectrum. Both games are quite ruthless in their approach to combat. 2400 doesn’t have combat rules per se, but offers a catch-hall saving throw rule. Into the Odd famously has auto-hit with some damage reduction based on armor. I've got some thoughts about both games. 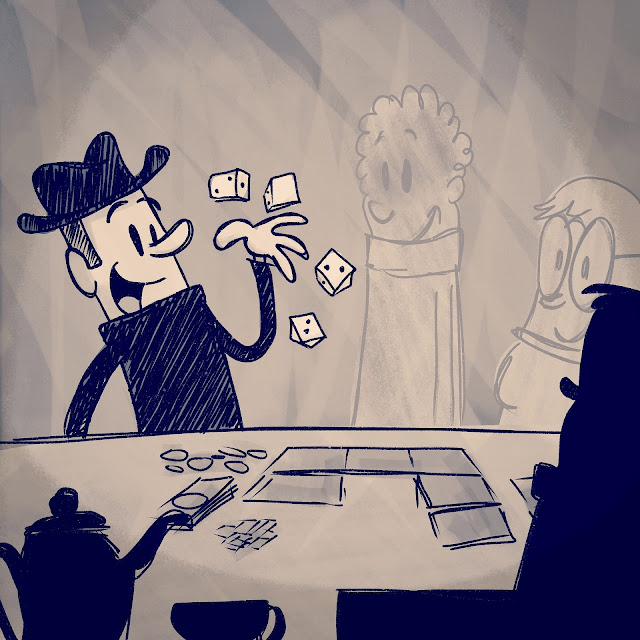 Personally, I prefer play experiences where death is definitely on the table if you engage in combat. I don’t want combat to feel like a sport or trade. Usually, this often happens when characters have less than 10 hit points and damage is dealt using the polyhedrals.

I think Into the Odd does this rather well, since the amount of HP is typically rather low. The enhanced and hindered attacks complements creative use of the situation and space the players are in. For example, trying to surround an enemy or knocking them on their ass could grant you a d12 of damage, even if you’re equipped with a dagger.

2400, on the other hand, just does away with the notion of hit points. The risk should increase considerably, right? Well, sort of. 2400 also has this rule where you can break items to convert hits into a “hindrance”, i.e. a worse saving throw, for a brief time. In my experience, this sort of introduces oddities more than it flows. In 2400, the players will often find that they can mitigate risk by a) having lots of breakable stuff, and b) have a high skill. To make themselves survivable, it follows that they would try to max their hand-to-hand and shooting skills.

What’s important in 2400 is that the rolls you make have pre-determined thresholds, where results of 1 - 2 are deadliest, 3 - 4 are bad, but not necessarily lethal, and anything above that is a success. If you have a skill, you get to roll a d8, while you get a d12 if you max out the skill. While this is a cool rule, I think it detaches the character from the environment. Instead of accounting for things like cover or flanking, the character presumably just employs these factors implicitly through the roll.

What I think is important is that the players feel it when they engage with the environment of a combat situation. I think being told what happens, such as “You sprayed the enemy with your smg before you dove to cover behind a barrel” is less satisfying. Taking cover should be “tangible” - the player should feel that this is beneficial. In Into the Odd, you would “feel” this when the enemy is forced to roll a d4 instead of their d10.

This makes me think that the 2400 model would benefit from having a bit of “scalability” in the die roll. For example, if your default die was d4 and the max die was whichever your skill indicated, you could actively take steps to get to your max die. Dive for cover, try to get a drop on the enemy, etc.

Overall, I really admire both games, but I’m feeling a stronger draw to Into the Odd lately. There is an advantage to using HP, where it communicates a degree of “oh shit!” to the player. As a player, you know you’re in deep shit when you only have 2 HP left. It feeds into the internal narrative the player is experiencing at the table and definitely informs their decisions.

Normally I don’t get too much into rules discussions and I sort of despise side-tracking play with on-the-spot arithmetic moments. However, some recent experience at the table has hinted to me that there might be a sweet spot of having the players know what to do, and not having to lead them through each moment. And as noted, there’s a freebie effect of having that “low number” wailing doom to the player.

It's been a while since I've last posted anything. Covid knocked me out, unfortunately, and made it difficult for me to write anything longform. Things are looking better now, though!

By the way, I disabled comments on this blog due to incessant spam. If you have any thoughts about the blogpost, drop a line at my discord.