How I run games

This is a non-exhaustive tour of how I run games. I might make more posts like this in the future. I don’t think of this as a practical guide, but more of a reflection of how I think I run games. 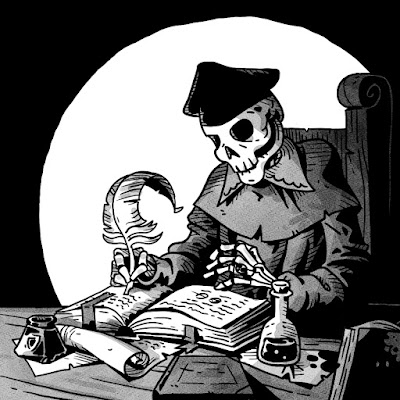 Me, preparing for a session. Illustration by Bert!

If I’m preparing for a session with new players that I don’t know well, I typically start out with some safety talk. Lines and veils, X Cards and such are features I make available. These are great to prevent uncomfortable or harmful experiences in play.

I think things through. Usually I do this whenever my brain has idle time. I might be in the shower or on a hike. What I think about are where the players might want to go, what kind of encounters there might be,  and what other events might influence the session. Thinking through these things once makes it easier for me to recall and run in sessions later.

I also map out places by making node graphs. I think they are more flexible and useful than gridded maps. I do make more high fidelity maps too, but they take more time than I can typically get done between sessions. However a node graph typically provides me with the most relevant directions a group might take.

For each node on this graph I take notes about what might be there. Typically this includes NPCs, treasures and notable features. I usually also add some key words for “garnish” that I use while I run, such as weather, furniture, smells, etc.

If the campaign features a lot of agents, such as factions and influential NPCs, I keep a list of those and make some decisions whether they have some impact before the session starts. Outcomes could be anything from rumors to allies and enemies appearing in that session.

When I run a game, I kind of imagine myself as both a conductor and a referee. I try to keep an overview and know when to take action to keep the session flowing.  I make considerations for if or when rules apply. When an unexpected situation occurs, I make a ruling on the fly.

I set up the initial situation. Sometimes this requires more time depending on whether it is a continuation from another session or not. I prefer letting the players recap the events of the previous session. Once they’ve done that, I take over and describe their immediate situation.

I ask what the players want to do. I differentiate between "I want to do" and "I do [thing]". The latter is committed and will have immediate effect. I often inform the players of potential risks or consequences before asking if that is what they do. When the players find an action they want to take, I inform them of the outcome, whether that is providing more descriptions or updating the situation. Sometimes I involve dice rolls or leave it to the players to describe what happens. I consider this the basis of roleplay - a continuous conversation which exchanges information between the players and the world I’m presenting.

I change the spotlight every 2 - 5 minutes. Everyone gets to respond, but I also want every player to be heard at the table and let them feel that they have an impact. I think that keeping players engaged is important. I don’t think I succeed at this all the time, however.

Player characters can attempt anything understood to be possible in the game world. If what they do has risks associated with it, I will ask for rolls. By default, I do not make players roll to see if they do an action.

After a session, I ask for and provide feedback. First I ask how the players felt about the session, then I voice my thoughts. If there’s anything that should be changed for next time, it’s often easier to address while the session is still fresh in memory.

I let the game’s world and characters inform play. The game’s world can be, for example, Star Wars, Forgotten Realms or whatever else you can imagine. Me and my players’ understanding of these worlds inform my rulings when we play in these worlds. My fellow players’ characters then act in this world, sticking to what we understand is possible there.

I think that rules aren’t the game. They exist in service to the game. Roleplaying games don’t require rules at all to begin with, but they can provide convenient procedures. My cut-off point is usually when the rules start weighing down the play experience. If a small skirmish between 4 players and 6 hobgoblins takes more than 5 minutes to resolve, then either it has to be really entertaining or the rules for the skirmish should be reconsidered.

I aim for verisimilitude over realism. I can’t build realistic simulations for every possible situation that we might encounter in our sessions. Therefore I try to aim for something that seems “truthy” enough and lets the players suspend their disbelief.

I think “filler sessions” should be avoided. As I touched on in my previous blog post, one-shot mentality and non-linearity usually provides for more rewarding experiences. Sessions that are sort of between interesting situations, whether it is travel, returning to town and “shopping” or facilitating downtime, I think are worth handling between sessions rather than as a session.