I’ve cooked up a setting recently, which I’ve called Netherlight. Prime sources of inspiration are Treasure Planet and Warhammer (both fantasy and 40k). I want to call it “pulse rifle fantasy” in a nod to “flintlock fantasy”.

I’ve been playing Netherlight using a modification of 24XX. 24XX, the SRD of the 2400 micro games by Jason Tocci, is an absolute gem of a game. What I like about it is how easy it is to run, especially with a FKR mindset. No wonder I want to adopt it as a framework for my Netherlight project.

Incidentally, I stumbled on an issue when it came to making an item list for my setting. Here’s how 2400 describes its weapons:

Keep in mind, 2400 is a cyberpunk setting, so it’s pretty easy to imagine how a pistol or rifle works. For my part, I have “pulse rifles”, which I imagine are sort of in the shape of a musket, but they fire some sort of energy bolt. After each shot, it has to cool down a few seconds. So I have some information that I should convey to the reader. How can I achieve this? 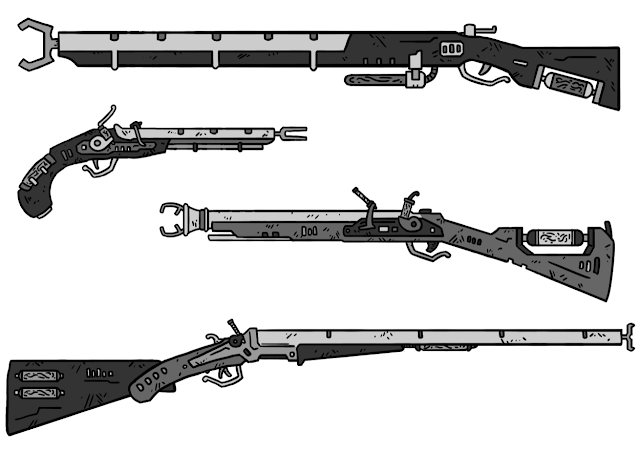 "Pulse Weapons" by Ewerton Lua for the Netherlight project.

I could go about making some rules to model this, such as “Overheat - spend a moment to let the weapon cool down.” or maybe if 2400 had game turns, I could write something like “Overheat - after firing, a weapon with Overheat cannot fire for the next two turns.” I could go down that route, but I would be undertaking rules-modelling for basically anything that’s unique about my setting.

However, I came to think of what Chris McDowall has been writing recently. Specifically Rules Heavy - Worlds and Classes.

The idea of qualitative rules design is an interesting one, but I want to make a case for just keeping it in the fiction. Whether there truly is a distinction to be made there, I am not quite sure. But for the purpose of writing something for Netherlight’s weapons that fits with the 2400 style, I have come up with the following:

PULSE WEAPONS: Powered by fulgurium crystals, pulse weapons are deadly weapons that shoot bolts of pulsed energy. Due to the intense energies the weapon harnesses, its rate of fire is slow. After each shot, a pulse weapon must dissipate heat in order to fire again.

Carbine (bulky) - as a pistol, but can charge a shot with explosive blast. Upgrades: tractor beam, greater blast, stun pulse.

Now, the section I wrote here should give an idea of how they work. Exactly how long the pulse weapon has to dissipate heat is left to the group’s interpretation. I would say 15 - 20 seconds, if it matters. For 24XX it doesn’t matter that much in my experience.

I’m going to see how this works for other things as well, such as special types of armor and the spacecraft in the setting. Ideally, I want to give both the players and the GM a guide to the world, rather than a piece of work that’s written in two languages - one in fiction and the other in mechanisms.